More projects have been published using Depthkit than any other volumetric video solution. See a snapshot of some groundbreaking work below. Some of these volumetric films require specialized virtual reality or augmented reality headsets, while others are available on the web or mobile devices.

Based on the Participant Media feature-length documentary Zero Days Directed by Alex Gibney, Zero Days VR introduces a new dimension to the original feature by telling the story from a perspective that wasn’t possible before the emergence of virtual reality. The Zero Days VR experience visualizes the story of Stuxnet in a new way: audiences will be placed inside the invisible world of computer viruses experiencing the high stakes of cyber warfare at a human scale. Zero Days VR is the first volumetric experience to win an Emmy award!

A generation of artists and hackers have emerged on the internet using open source technologies for experiments in art and design. CLOUDS is an interactive documentary and a portrait of this community of digital pioneers, explored through the lens of code. The project asks questions about the future of creativity at a time when algorithms play an important role in shaping culture.

CLOUDS was the genesis of Depthkit, the first interactive documentary to use a combination of volumetric video capture with virtual reality.

CLOUDS_Glimpse_June from Jonathan Minard on Vimeo.

Imogen Heap VR is centered on a Depthkit-powered holographic experience where Imogen performs a series of songs including an unreleased Frou Frou track and an entirely new mix of “Hide and Seek.” Debuted on TheWaveVR, the performance transports viewers to Imogen’s home studio in London.

Universe Within: Digital Lives in the Global Highrise is an interactive documentary that takes us into the apartments, hearts, minds and computers of vertical citizens around the world to reveal the digital human condition in the 21st century. Trapped in our highrise units, can we find love, hate, peace, god, community—or a better world—online?

Experience Highrise Universe Within on the web

Universe Within: Digital Lives in the Global Highrise (Walkthrough) from National Film Board of Canada on Vimeo.

Virtual Art Sessions is a Chrome Experiment in virtual reality art, made with the immersive drawing program Tilt Brush. Google teamed up with six world-renowned artists, bringing them a new way to paint, draw and sculpt. Their sessions were recorded with Depthkit and made accessible on the web, so you can explore how the artists developed their virtual reality creations from any angle.

Experience Virtual Art Sessions on the web
Go behind the scenes with Jeff Nusz and his team.

At the beginning of 2017, Tzina Dizengoff square, one of Tel Aviv’s emblematic sites, was demolished. The square was a home for the lonely and marginalized characters of the area. This project tells the story of the people who gravitated toward the square and spent their days in it. In this interactive WebVR documentary, they talk about their lives and the square. Tzina: symphony of longing invites the viewer for a physical walk to explore the square and it characters at different times of the day, with elements of animation, fantasy and interactive sound.

Watch Tzina Symphony of Longing on the on the web

The geography of Brownsville, Brooklyn is divided by an ongoing rivalry between public housing developments. In this virtual reality documentary, players from both sides of the conflict work together to explore the stories, histories, and dreams of the community and its residents. By participating in this world-adventure simulation, players must traverse the structural realities of the neighborhood while searching to answer a simple question; do we have more in common than we once thought?

This creative nonfiction experience uses multi-narrative and volumetric capture to journey through the mind of Lisa as she remembers her lost love, Erik. Fragments of memories of their life together appear inside a void and, over time, become entangled with a haunting vision, culminating in the shocking moment of Erik's death.

Read about the making of Vestige on No Film School

Terminal 3 is an interactive, augmented-reality documentary that explores contemporary Muslim identities in the U.S. through the lens of an airport interrogation. As viewers put on the Hololens, they step into the uncanny to directly interrogate, and determine the fate of, the hologram passenger before them. These interrogations become strikingly personal encounters that only end when the participant decides if the hologram should be let into the country or not—but there is a twist.

Queerskins explores the dynamic tension between the “real” and the virtual, fact and fiction, memory and desire through a compelling, character-driven narrative. The story revolves around a complex relationship between a devoutly Catholic mother and her gay son who dies of AIDS. Queerskins explores the quintessentially human desire to transcend ordinary reality through memory, belief and imagination.

Read about Queerskins on Forbes

Comprised of photographs and cutting edge virtual reality volumetric testimonials, Made This Way: Redefining Masculinity is an interactive mixed-media documentary that explores how transgender men are challenging gender norms and redefining the traditional notions of masculinity. 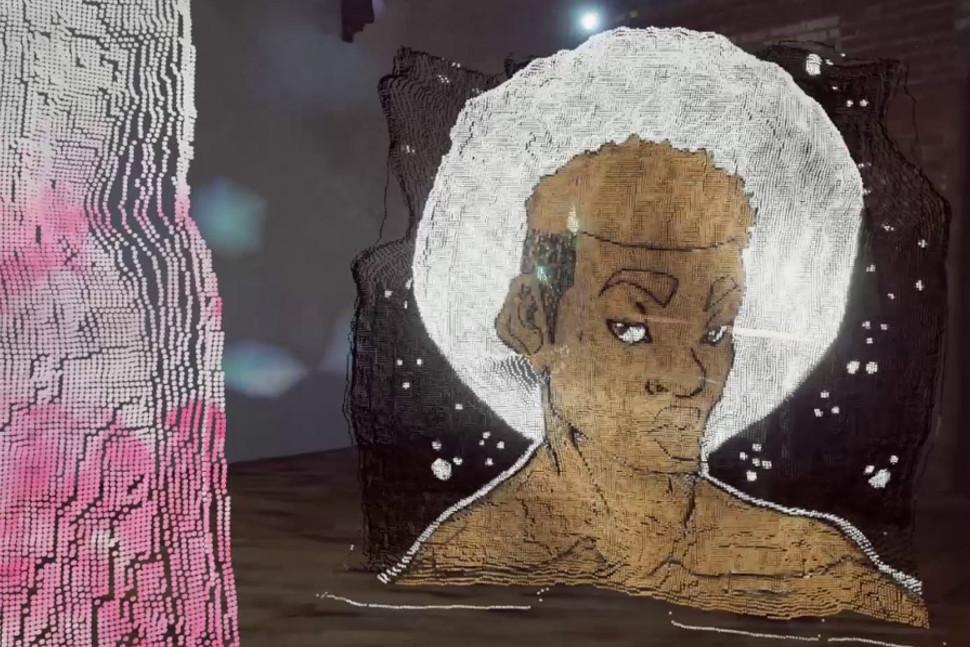 For the Amazonian Yawanawa, ‘medicine’ has the power to travel you in a vision to a place you have never been. Hushuhu, the first woman shaman of the Yawanawa uses VR like medicine to open a portal to another way of knowing. AWAVENA is a collaboration between a community and an artist, melding technology and transcendent experience so that a vision can be shared, and a story told of a people ascending from the edge of extinction.

Depthkit is used to capture the first shawoman as a guide to share the Yawanawa story and visions, this immersive work presents flourescent and bioluminescent specimens in previously unseen colors from the forest world, to create a vivid, luminous vision.

by Gabo Arora, Superbright and Sensorium

Understanding Sufism, by its very nature, is experiential. It is a commonly misunderstood branch of Islam that is often typecast as esoteric, mystical, and far outside of mainstream practices. But in many Muslim countries, Sufism is deeply bound to national heritage and other artistic outlets. Zikr enables four people at a time to experience Sufism much as practitioners do in Tunisia and, together, participate in ecstatic music rituals and encounter new spiritual possibilities.

Depthkit is used to capture the performances of Sufi rituals, mixed with 360 video for a magical real experience.

Trinity is the pilot episode for a VR series set in a future where humans have long been extinct and androids are fighting a final war against an all-powerful AI.

Read about Trinity on the Made with Unity blog

At Scatter, we consider anyone who uses Depthkit to be our creative collaborators in helping to shape the medium. Our Powered by Depthkit program dedicated in kind creative, technical and production support for projects from our community, focussing on telling stories with a social mission and elevating voices of first time creators with a diversity of backgrounds and perspectives.

At the 2018 Tribeca Film Festival in New York, three out of the five experiences in the immersive category were powered by Depthkit.

Check out the trailer below.

Powered by Depthkit at Tribeca Film Festival 2018 from Scatter on Vimeo.

Updated about 1 month ago