While the ultimate goal and solution to livestreaming will be a more direct integration with WebRTC within Depthkit and Unity, in the mean time you can use the prototype workflow below. It enables low latency streaming over WebRTC, facilitated by Spout, OBS and a web browser.

This workflow is designed for a unidirectional stream of video, but could be extended to be bidirectional by duplicating the workflow for the opposite direction. At a high level, the workflow is to leverage existing technologies and services built on WebRTC to transport a Depthkit live stream over the internet or a local network very quickly and with very low latency.

The main components of this workflow are the Depthkit capture app, OBS, Spout, OBS Ninja, Unity, and the Depthkit Studio Expansion packages for Unity. 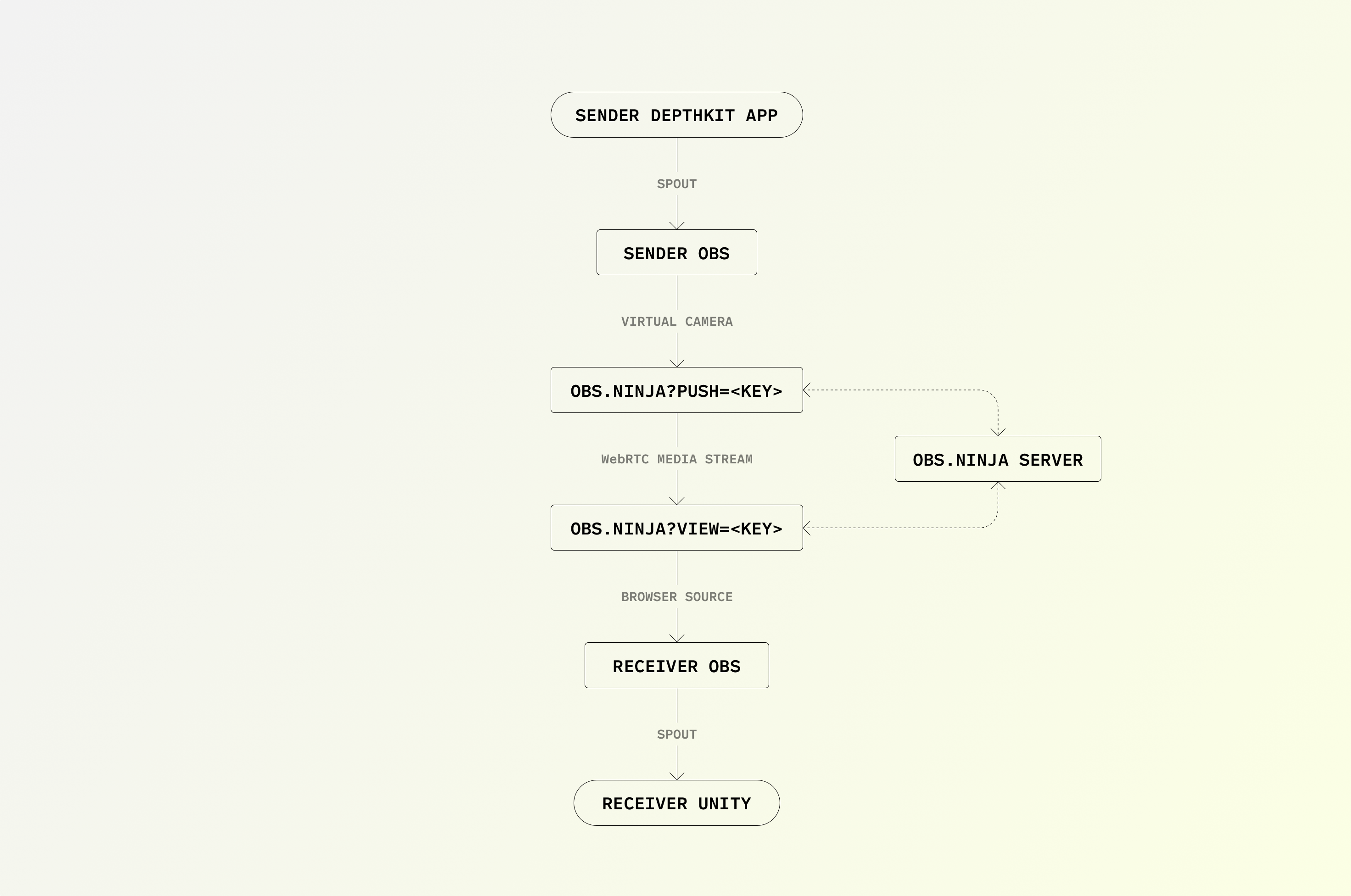 At its core, VDO.Ninja is like a Zoom or Google Meet built for video engineers. It supports video chat rooms, but more importantly for our purposes it supports unidirectional video streaming with lots of options to control quality, and is easy to integrate into OBS.

To set up the sending side of the workflow, follow these steps:

To set up the receiving side of the workflow, follow these steps:

To automate and customize this workflow more, additional URL parameters may be added.

WebRTC does not technically require any internet connection, although in the examples above there are aspects of this system that are hosted on the publicly available internet. An important part of this system is a STUN server, which determines how to route the video stream from the sender to receiver. If the STUN server is not accessible on your LAN, then the IP addresses that it gives to each peer are going to be public IP addresses, meaning your video will be going over the internet, even if your computers are on the same LAN.

To allow WebRTC to discover local network IP addresses of each peer, a locally hosted STUN server must be used. The open source STUN server STUNTMAN is simple to set up and run:

If you've successfully used the local STUN server, you should see some output in the command prompt window once you establish a connection between the sender and receiver.

At this point you should be able to set the vb option significantly higher (up to 60000) to take advantage of the increased bandwidth available on the LAN.

Even when running a local STUN server, there are still other parts of this system (VDO Ninja itself) that are using the internet. Luckily VDO Ninja is also open source, and can be locally hosted as well for a more secure and reliable set up, but that is outside the scope of this document for now.