Select your depth sensor in the drop down menu found under Sensor Configuration. With Depthkit you have the freedom to switch back and forth between your available sensors. However, with Depthkit Record and Core, only one sensor can be used to capture at a given time. 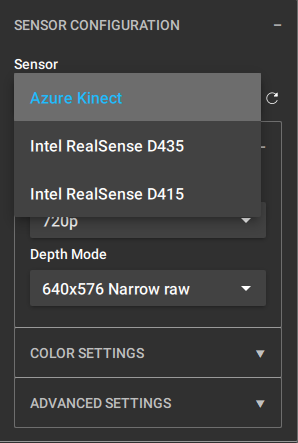 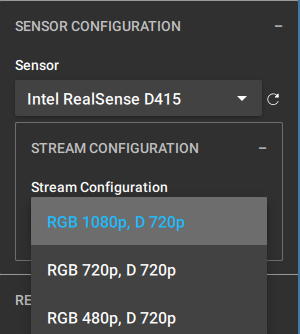 For the Azure Kinect, color and depth resolutions will have their own configuration menus for individual customization of each stream. 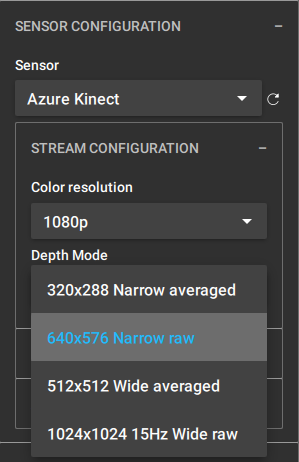 The Azure Kinect has a robust range of manual settings for full control over the video quality of the sensor video.

For more custom sensor configurations, see the following Advanced Settings. For the following parameters, we strongly recommend testing before using during recording. 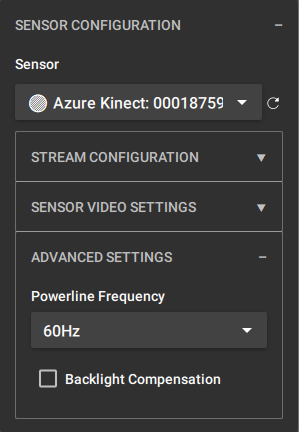 The depth rangedepth range - The depth near and far planes represented as hue encoded ranges, red as the near plane and pink as the farthest plane before clipping., represented in meters, is the 3D space in which you will be capturing. For recording, this range acts as a preview only. If you reduce the depth range, the maximum sensor range will still be captured. However, it is important to be aware of your near and far planes. These represent that minimum and maximum distance that you can capture from the sensor.

Keep an eye on the movement of your subject so you don't clip fingers and toes when adjusting the near/far planes. It may be helpful to tape or mark your capture space so the subject has a sense of the intended capture space.

You will notice that the black and white striped areas represent areas that fall out of the view frustumview frustum - The region of 3D space available for capture by the sensor. that will be clipped. Setting your depth rangedepth range - The depth near and far planes represented as hue encoded ranges, red as the near plane and pink as the farthest plane before clipping. is non-destructive. You should set the desired range before recording. However, when you transition to the Edit & Export window, you can adjust the range again before export. More on that later.

Now you are set up and ready to hit record!