It's necessary to synchronize all of your sensors to each other to ensure that the data from each sensor aligns. This is accomplished by connecting all of the sensors with sync cables.

To synchronize the sensors, expose the sync ports on the back of your Azure Kinects by removing the two screws in the rear of the device (a Torx wrench is included with the Kinect), and slipping off the white plastic casing.

This configuration uses one of your sensors as the generator, which provides a sync reference signal to each of the other sensors by looping through each sensor's sync ports.

Select one sensor to be your primary or master sensor. This sensor will have nothing plugged into its Sync In port.

Connect a cable from the primary sensor's Sync Out port to the Sync In port of the next sensor. Repeat this for every sensor in the chain, until you reach the last sensor, which will have nothing plugged into its Sync Out port.

Once the hardware is setup, synchronization will occur automatically within Depthkit. This can be confirmed by starting to stream the sensors, then looking at the sensor configuration options to see that they all either say Multicam Master (one sensor) or Multicam Subordinate (the remaining sensors) - If any say Standalone, check your sync cable routing. 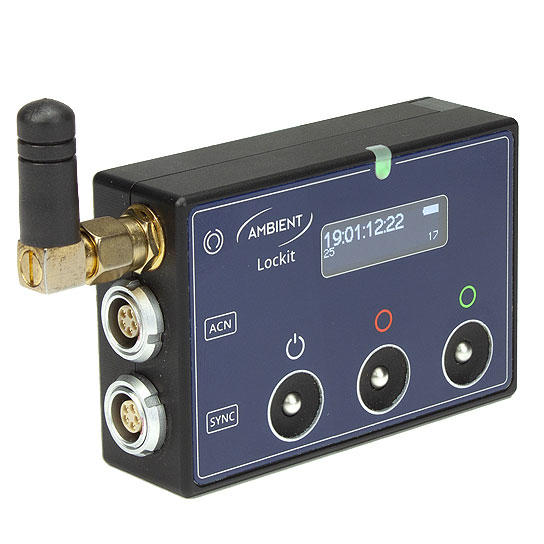 Sensor sync can be driven from an external source. This is useful for ensuring that Depthkit recordings do not drift from other types of simultaneous recordings, like audio or Depthkit Cinema cameras.

An external sync generator must conform to the characteristics listed in Microsoft's documentation.

One device which can provide a compatible signal is Ambient Recording's ACN-CL Lockit, which is capable of outputting a 30.0fps Pulse-per-Frame sync signal. (The required custom Lemo cable is sold separately.) This sync generator can be jammed or locked to other sync generators and recording devices to ensure your recordings remain temporally locked.

To make use of this, set up your sensors in daisy-chain configuration as described above. Connect the external sync generator to the 'Sync In' port on your primary sensor.

When starting up your sensors in the Multicam Calibration/Streaming context: